Please go to our new interactive portal as this report will no longer be updated from April 2020.

Flight paths are designed to accommodate, and keep segregated, aircraft arriving from and departing to ports in different directions. There are standard flight paths for jets and routes for general aviation aircraft.

On 14 June 2020 flight paths and airspace change to support the new runway operations for Runway 13/31. Runway 18/36 is decommissioned from this date.

To the north of the airport most of the runway-aligned approach is conducted over water, with aircraft crossing land between Yaroomba and Marcoola. To the south aircraft will be runway-aligned by the Maroochy River, and some will be aligned as far out at Sippy Downs, depending on the type of approach being conducted.

There is no minimum altitude for aircraft in process of landing. Aircraft will generally descend on a glide slope of three degrees.

Click the image below to enlarge it, and use your browser Back button to return to this page. Departure flight paths allow aircraft to maintain the runway heading for a short time until they are stabilised in flight, and then to turn towards the route that will take them to their destination.

Most aircraft departing southwards on Runway 18 will turn towards the coast before reaching the Maroochy River. Due to differences in aircraft performance, some aircraft will not be able to execute the turn this tightly and will travel further south before turning.

The altitude of aircraft after departure will depend on factors such as the type of aircraft and its weight, how heavily laden it is with fuel and passengers, and the atmospheric conditions at the time. All these factors affect an aircraft’s climb rate. There is no regulated minimum altitude for an aircraft in the process of taking off.

Click the image below to enlarge it, and use your browser Back button to return to this page. 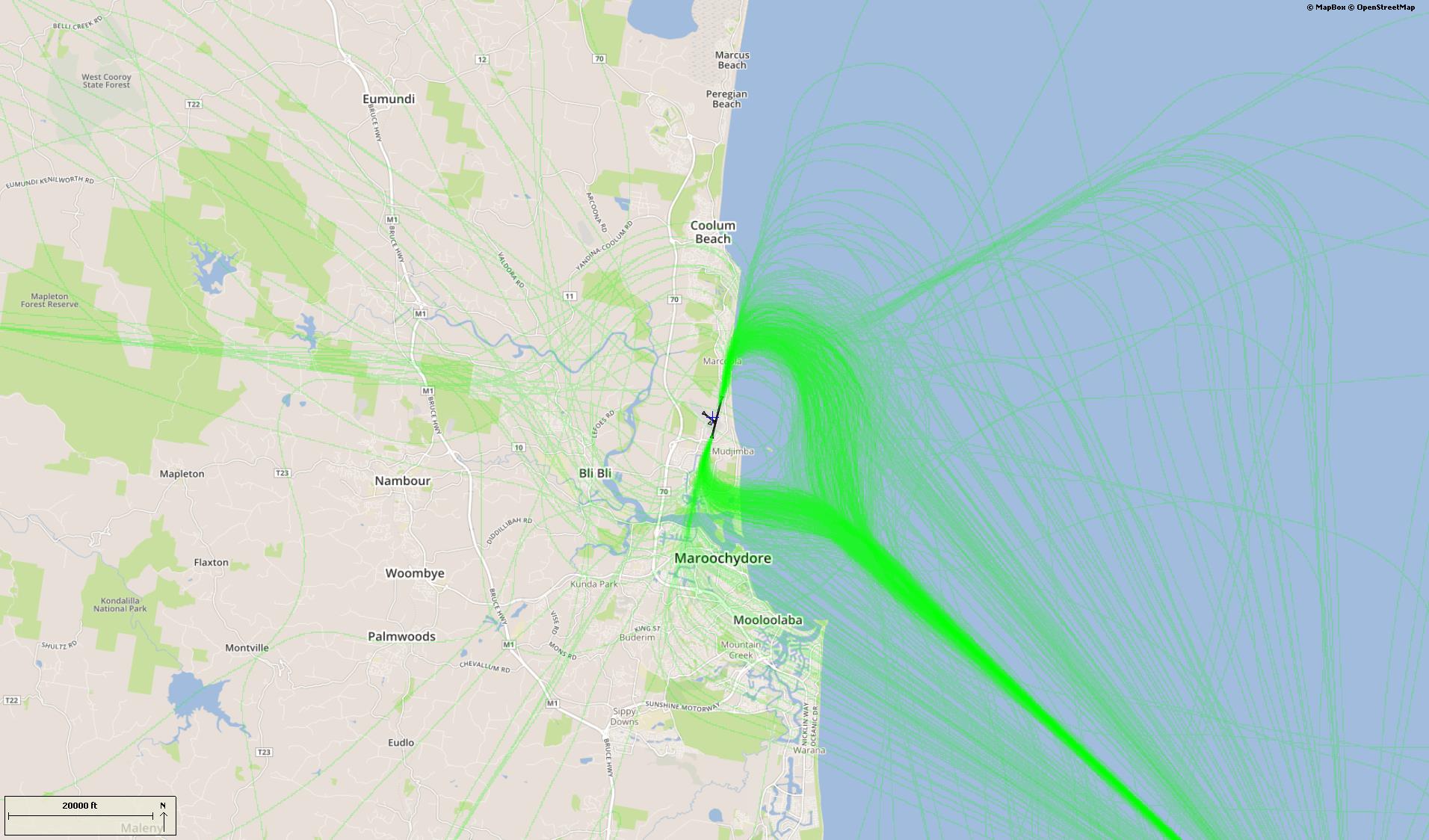 A growing number of modern aircraft are now fitted with navigation systems that use satellite-assisted guidance which allow aircraft to fly with a higher degree of accuracy and more closely follow the same route as other aircraft. Airservices refers to these routes as ‘Smart Tracking’. Smart Tracking technology makes air travel safer, cleaner and more dependable. It also has the potential to improve noise outcomes for communities living close to airports. For example, the Smart Tracking approach from the south was designed to fly down the Maroochy River.

General aviation aircraft using Sunshine Coast Airport fly under Visual Flight Rules (VFR). There are designated routes for VFR aircraft to ensure that VFR traffic remains separate from aircraft flying under Instrument Flight Rules (IFR) such as passenger jets. It is not mandatory that VFR aircraft fly these routes, but many do, especially as they approach or depart airports.

VFR routes include defined entry and exit points to and from controlled airspace. These are landmarks that are easily seen by the pilot from the air. These landmarks are highlighted in the images below, which also show the average percentage of arrivals or departures that use the route.

Ewen Maddock Dam marks the inbound route from the south which then tracks via the Ettamogah Pub and Nambour. There is also a coastal route which is often used by aircraft arriving from the Gold Coast or Bribie Island.

Click on the images below to enlarge them, and use your browser Back button to return to this page. 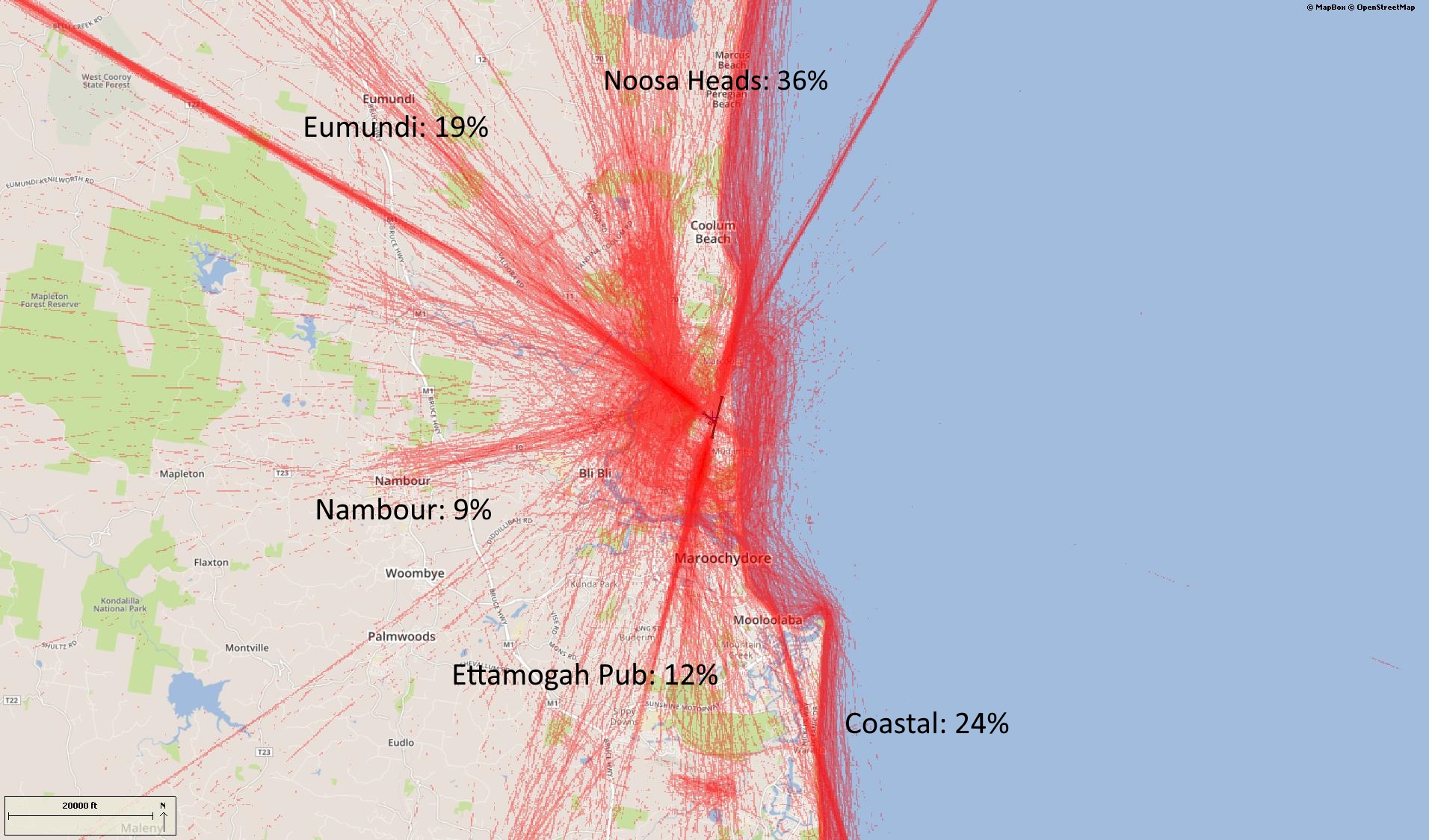 Outbound to the north aircraft commonly track via the coast unless Runway 18 is in use, in which case an inland route will be used. The route to the south tracks via the coast. Helicopter training areas have been established to the west of Caloundra Airport adjacent to the Bruce Highway (shown in image below), where training may occur between 7:30am and 10pm, to the north of the airport and west of the Sunshine Motorway, and to the west of Runway 12 at the Sunshine Coast Airport.

The image below shows tracks of helicopters travelling to and from the Bruce Highway training area. Click to enlarge the image and use your browser “Back” button to return to this page. Select a quarter to see track density plots of movements on arrival and departure routes. In these images, the hotter and deeper the colour, the more movements. Click to enlarge and use your “Back” button to return to this page. 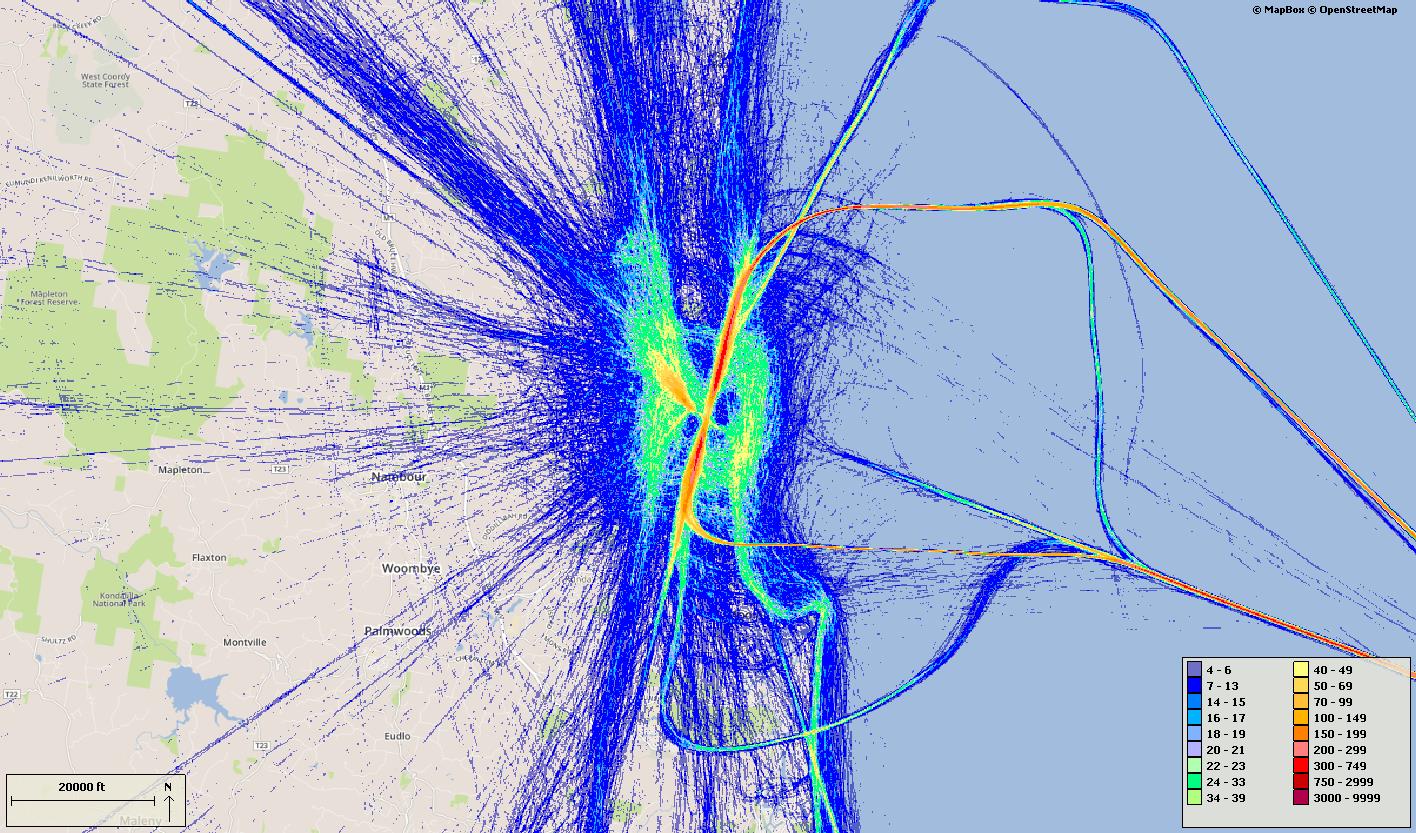 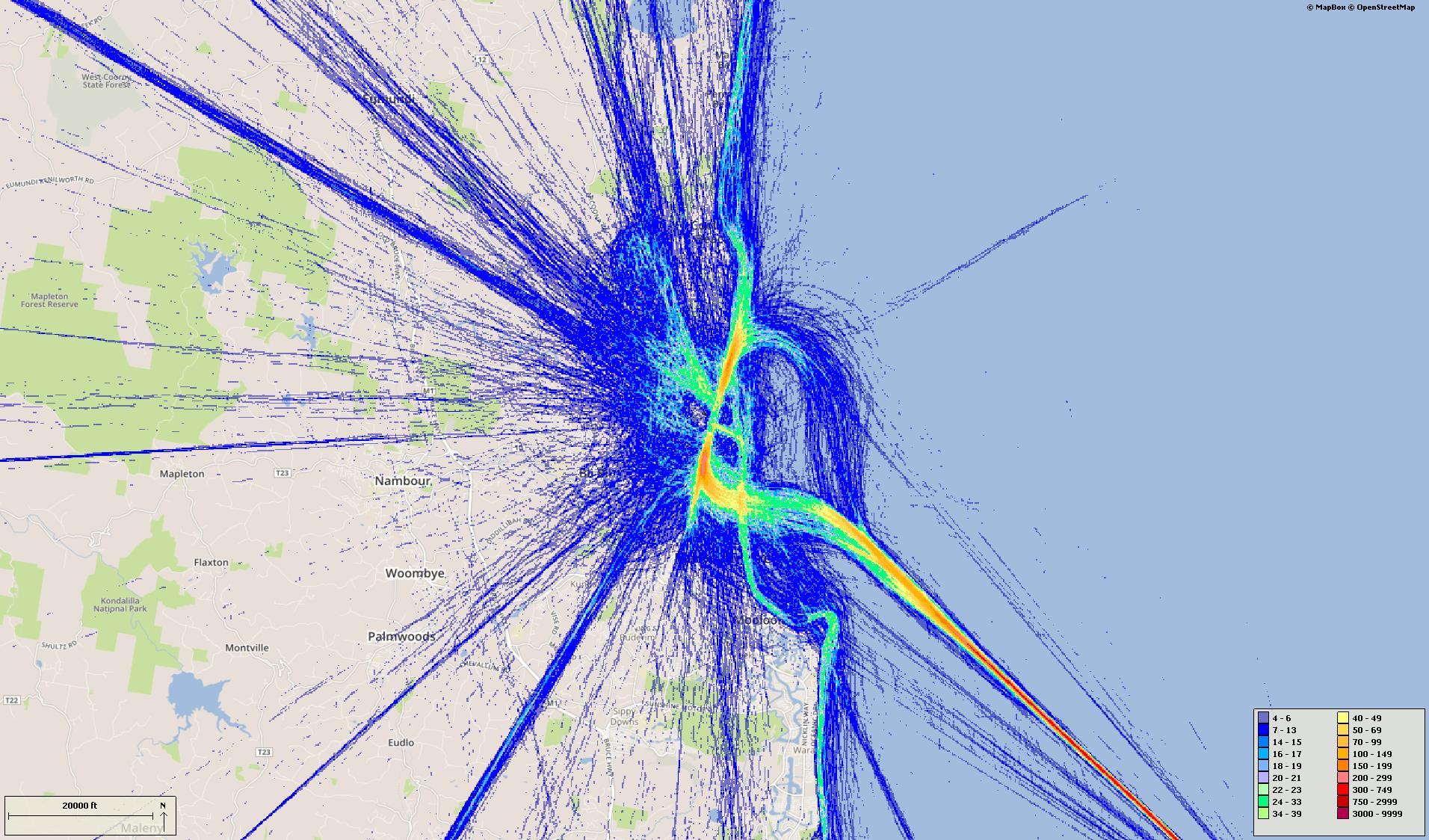